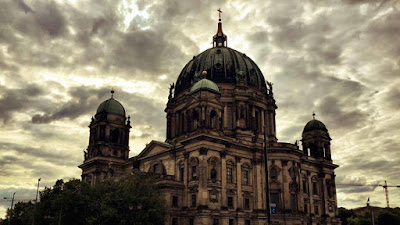 My girlfriend and I have been in Berlin the last few days after a somewhat stressful and arduous trip (11 hours driving to the airport, 3 hour delay in the first plane sitting on the runway - no sleep for 38 hours, and a 45 min delay on the second). It is an amazing city that to me, feels like NYC but without the pretentious douchebags everywhere.
A few things I've noticed / discovered:
You can walk down the street drinking a beer which is perfectly legal.
Almost everyone smokes cigarettes.
Hoards of people rides bikes and not even nice bikes - most of them are just old single speed bicycles with baskets on the front.
Many of the 2 lane roads don't have a dividing line in the middle and on top of that, the street our friends live on has a set of street car tracks going each direction down the road shared by cars (mind blown).
Very few people are obese despite eating loads of bread and ice cream because first of all they walk or cycle a lot but also because Berliners don't seem to be all that stressed out about life.
Almost no one smiles unless they are in a conversation with a friend and no one greets passers by on the street. (I bring this up because of my last post. More on that later.)
It's fairly peaceful despite the loads of people.

Now I'm not trying to say that Berlin is Nirvana or something like that but it has a lot going for it. Much of the way things are now is probably due to the struggle that they have come through in the last 100 years. Before Berlin was unified after the wall came down, no one trusted anyone else - not even family, because anyone might report you to the police. This has lead to their massive affinity for privacy and also the seeming lack of friendliness on the streets. Now just to be clear, Berliners are fantastic people and a lot of fun, they just aren't likely to ask you how you are doing in a simple interaction like we do in America. It's nice to have the bullshit cut away although I'll be honest, I feel bad ignoring people. If you read my last post, I like to try and show people that I care about them as a person by greeting them with at least a smile regardless of their station in life.

Maybe it's just a cultural guilt. Maybe that's what has caused a lot of the problems in America and has made us susceptible to the whims of the assholes that have controlled the country for a long time. We get manipulated into feeling bad for some other country and send our military over to "help out the little guy' when in all reality, we are probably only over there for some kind of monetary reason that benefits the 1%. Seeing the difference in the two cultures calls out the glaring problems at home. I can pretty much guarantee that if we had a road in the US with no lines and two train tracks...well we wouldn't because someone would get in an accident because they are stupid and would sue. Even the dogs are better behaved than most American dogs. We saw a woman walking down the street with 5 little dogs and they all stayed close to her without leashes. In fact very few dogs are on leashes because they listen to their owners.

We've caused all of our problems in America ourselves. It's not the immigrants or the, minorities, or the 1%, it's everyone. A salesman won't stick around long if there are no customers and we are buying into the bullshit hook, line and sinker that is being hawked through the media and advertising. I love NYC but the lust for recognition and power are palpable in areas like Manhattan and it's off putting. Berlin has been a refreshing experience. Seeing people just going about life seemingly without a care for what other people think of them is amazing. We need a good dose of that in the states if we want pull out of the nose dive our society has dropped into.
Posted by Status Quo Fugitive at 3:50 AM