We decided to cram a little side stop to Prague into our trip and had the good fortune of being accompanied by our friends from Berlin. They have a car so we were able to drive the 4 hours instead of taking the bus which was fortunate. I fell asleep for most of the drive because I wasn't feeling the greatest and missed much of the countryside but did get to experience the thrills of flying down the Audubon at around 180 KPH. After finally figuring out how to get into the apartment we had rented, we set out to walk around the city for a bit without a plan in mind. My first impressions were "holy crap there are a lot of wires over head for street cars" and "this city is really clean". 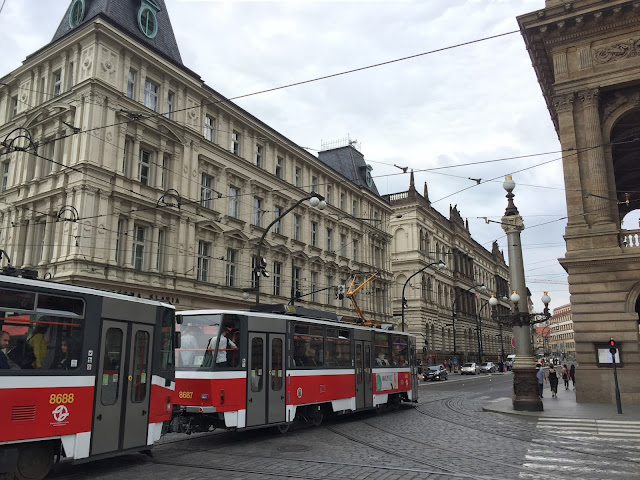 There are workers going around with little brooms and dust pans cleaning the sidewalks constantly keeping the city looking quite fresh. We walked along the river for a bit stopping to get a spicy sausage from a street vendor and continued to the Charles bridge across the river from Prague 2 to Prague 1 / 6. I don't know the names of most of what we saw because we didn't plan it out, we just walked and let the wind take us where it would.

The bridge was jam packed with tourists and lots of people selling trinkets which isn't exactly my scene but there were two guys playing classical music on a couple accordions - an incongruity from what I expect out of an accordion but very beautiful. On the other side of the bridge we saw the spires of Prague Castle in the distance and decided to try and find it. It's claimed to be the biggest castle in the world however, it's not a traditional castle in the medieval sense but more of a compound. To get up to where the castle is, you have to climb a ton of stairs but you are rewarded with an amazing view of the city so it's totally worth it. 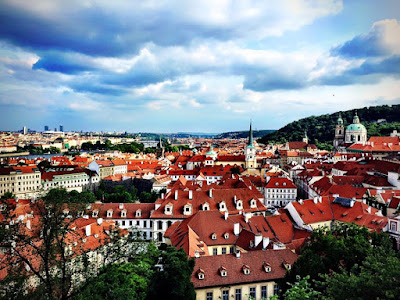 While we were resting at the top, my girlfriend struck up a conversation with a brother and sister who had stopped as well overhearing them talk about an art installation of giant babies with barcodes for faces. They were from America and have been traveling all around Europe for the past few weeks. Since we were all going to check out the castle, we ended up walking together and hanging out for the rest of the day which was a nice surprise.

Inside the "castle" is a massive church that is quite beautiful though I have little use for what goes on inside it. Note: don't wear a hat inside or some douche will tell you indignantly "this is a church" while a security guard rushes over to you insisting you take it off. 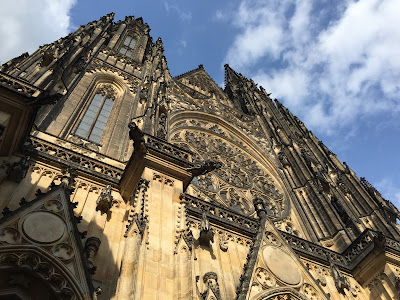 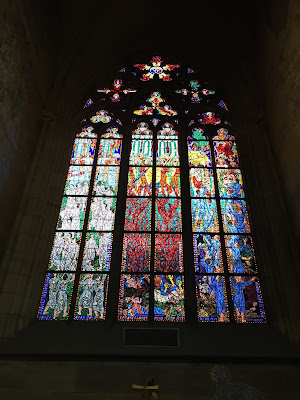 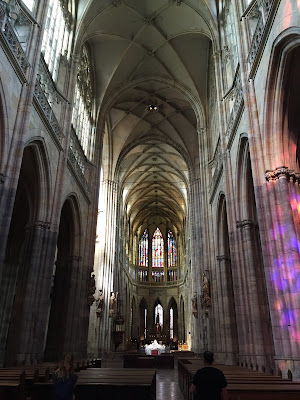 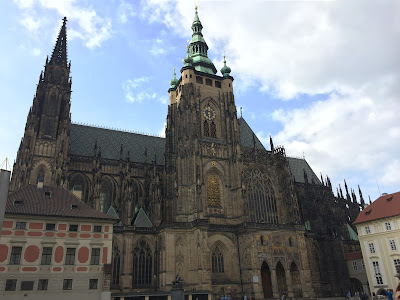 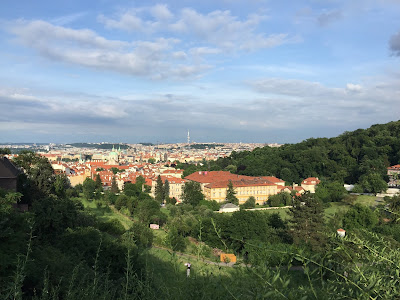 Our new friends told us about a brewery up the hill a little ways that has a beer that is, or at least the original recipe was, brewed by monks. After hiking up all the stairs, beer sounded amazing to everyone so we sallied forth to find it. Also hungry, we stopped before getting to the brewery (unsure if they sold food as well) and ate dinner at Velká Klášterní Restaurace where I had the best pizza of my life. After dinner we found Klasterni Pivovar (the brewery) around the corner and had several beers, talking till the place closed. Another note: They do actually sell food as well and I ordered bread sticks off the menu thinking it would be like Olive Garden. Instead the waiter brought a sealed package of little dried sticks similar to what they give kids in school but this was lacking the little spot of nasty cheese. I asked if we could just get a basket of bread instead which was much more to my liking.

It was about an hour walk back down the hill to our respective temporary homes and it was getting dark so we hurried that direction. Back at the bottom of the hill across the street from the bridge are numerous shops so we grabbed a popular Czech desert which consists of a tube of fried dough about 2.5" in diameter with chocolate smeared on the inside. It's a bit bizarre but tastes pretty good! As we walked a little further we ran into 4 young people sitting on the street playing popular American music on 3 guitars and one tambourine. When we reached the intersection to go our separate ways, someone said "well do you want to grab one more beer?" We all laughed and said "what the hell, why not!" That's something I love some much about this world, you can meet complete strangers and quickly become friends if you allow yourself to.

Around the corner, a small bar called the Red Room where beers are dirt cheap - like $4 for 6 pints, called our names. There was live music (of course American songs) and we had a couple more beers and then went to bed. One of the guys who got up to play a song said "I can play a Bon Jovi song, or I can play something cool" which cracked me up. A table full of Swedes went nuts at the mention of Bon Jovi so we all got to listen to Wanted Dead or Alive but I didn't mind because as anyone who knows me can attest, I like shitty music. Despite leaving America to see Europe it was fun to have a bit of home wherever we went since western music is rather ubiquitous.

Today we mostly wandered around again visiting the main square which was crowded with tourists with their infernal selfie sticks but the buildings and statues were cool. 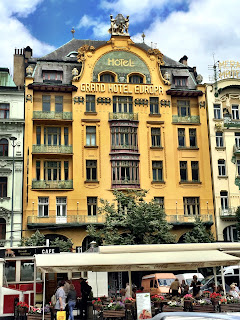 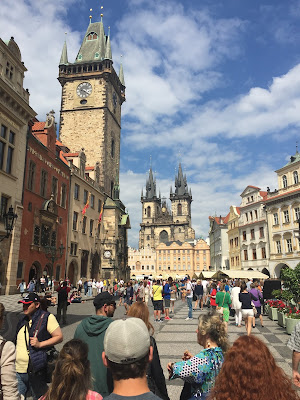 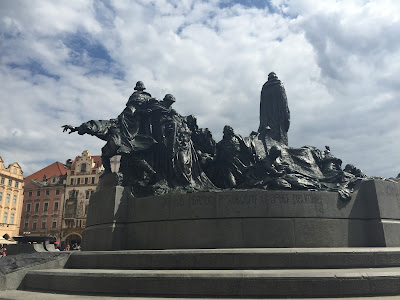 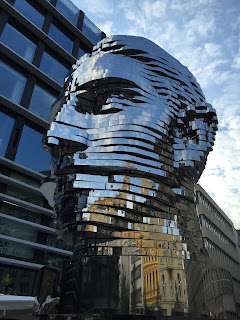 Later we stopped by a big library that my girlfriend was dying to see and then went out on the river in a paddle boat for about an hour ending the night playing cards and drinking beer back in our apt. 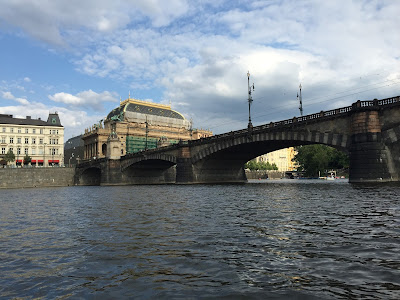 Prague is definitely a beautiful city that is full of history but it's also filled with tourists and all the crap that comes with that. There are entire streets with only souvenir shops all selling nearly identical shit and some of the employees are really freaking annoying. This one chick followed me around telling me how much stuff I was looking at was despite the fact that it all had price tags. I would never want to live here but it's definitely a place to check out if you are traveling through Europe especially if you love old buildings and history.